A Glance at Aaron’s “Feat”

The SBC camera ends up in the oddest places to capture the most unusual sights. . . this was no exception. When the call came in from one of our incredible trade contractors about a leak, without delay, Service Manager, Aaron Austin was on his way to solve the problem. Crutches and cast from his recent injury led him up the huge staircase to the attic access. When we came to the access door, which could only be entered by an 8′ ladder, Sales and Marketing Coordinator, Deborah Way made her way up to see if she could find the cause of the leak. As she 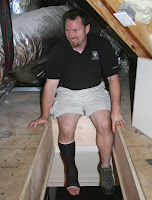 climbed, she noticed the ladder shifted. Surprised, she turned around to see Aaron was somehow climbing up behind her. After laughing and asking him what he was doing, there was no question that regardless of the cast on his leg, he was going to find the cause of the leak and get it fixed asap. And that he did.

Aaron constantly looks for ways to take customer service the the next rung on the ladder.
See All Posts