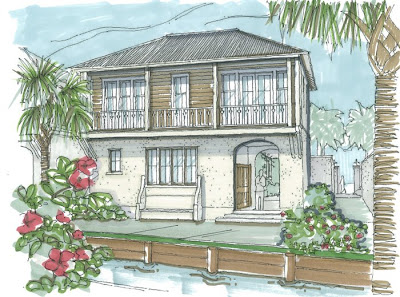 February 13, 2009 – Mount Pleasant, SC – Today Coastal Living, I’On Group and Structures Building Company celebrated the groundbreaking for the 2009 Idea Home on Jefferson Canal in I’On. Ten years ago, Coastal Living built its first Idea Home in I’On on Sowell Street. Now the prestigious lifestyle publication is coming back to the neighborhood to celebrate a decade of success.

The Idea Home will be built by Structures Building Company, an I’On Guild Custom Builder that was 2007’s Builder of the Year. Steve Kendrick, Structures Building Company Owner says, “as a 10-year resident of the neighborhood, I’m proud to be building this unique home and excited to see the Jefferson Canal project come to fruition in I’On. It is a great opportunity to showcase our green building techniques and spread the word about the economic, environmental, and health benefits of living in a sustainable home.”
The home, located on a reserved property in the heart of the neighborhood, will feature Caribbean style architecture and a uniquely private courtyard. The home will be completed and open for tours in late July through mid-October. Tickets will be available for $10 on site and at I’On Realty. Proceeds from the tours will be donated to a local charitable organization. The furnished home will be offered for sale by I’On Realty and it will be the flagship home among 13 custom home offerings designed as the Courts at Jefferson Canal. A special section on the Idea Home will be featured in the October 2009 issue of Coastal Living.
“Many people mistakenly think that the neighborhood is complete. But there are almost 100 homesites that have not yet been built upon,” said Vincent Graham, President of I’On Group. “The selection of I’On for the 2009 Idea Home is a further testament of the enduring appeal of walkable neighborhoods. Over the last ten years I’On has evolved and improved as each new home adds value to the whole.”
Structures Building Company is an award-winning custom builder specializing in high quality, green-built homes in the Charleston area. I’On Group, is a nationally recognized, award-winning new urban development group based in Mt. Pleasant, South Carolina. Coastal Living is a lifestyle magazine providing a definitive guide to comfort, simplicity and personal style. It is published by Southern Progress Corporation, a subsidiary of Time Inc.
See All Posts