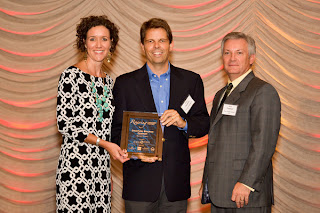 Last Thursday night, SC Biz presented the Roaring 20’s event in Columbia, South Carolina to recognize 40 Best-Performing companies in the state.  Dixon Hughes Goodman, Haynsworth Sinkler Boyd, P.A., Wells Fargo and PDA were all generous sponsors of the evening. We started off with a cocktail hour to mingle and see all the table top displays from the different companies.  As we made our way through the room, we enjoyed congratulating other companies who were part of the evening.

One detail Steve didn’t realize was that this was a state-wide event, he thought it was just local to Charleston. I knew it was a state-wide event, but I didn’t realize that we’d all be ranked, 20th-1st place over the course of the evening.  As the MC kicked everything off, he congratulated and acknowledged the hard work and success of each company and the feat it took to get through the past few years. I honestly believe that many people standing there were simply thankful to be included in on this honor, regardless of the ranking. . . at least that’s what we were feeling.

As they started with #20 in both the large and small business category, I leaned over to Steve and asked him where he thought we’d rank, he said, “20th”.  I laughed and said, “Really?!?”.  He said he just didn’t want any “pressure”.  I felt it was an honor to be there, regardless of the ranking – but thought it would be fun to see where we officially landed!

We listened and applauded the other companies as we made our way from 20th – 10th place, still not hearing our name.  Then somehow we found ourselves hearing 5th place announced, and still no sign of Structures.  Steve and I began to wonder if we were accidently invited and maybe we weren’t going to hear our name called at all.  🙂

Fourth place was announced and Steve leaned over and asked if I was nervous, I told him I wasn’t, because I still thought it was funny that we were still standing there with anticipation.  Once 1st and 2nd place were left, I leaned over to Steve and said my heart was definitely beating out of my chest. 🙂

Much to our surprise, we were shocked to hear, “And second place for the small business category is Structures Building Company!” What a complete surprise!  It didn’t matter to us in the slightest that we didn’t receive 1st place.  As Steve said, “Where would we go from here if we started with 1st this year!” Now we have something to push towards and seek to achieve next year! 🙂

Almost 14 years ago, Steve began building a company, not based on a foundation of what’s worked last year or what others are doing, but rather how can we continue to perfect the model that we’ve created with the client at the core each and every year.  This vision extends past his own goals, to a team he’s created that reflects the same passion he has for building a quality custom home, while delivering an enjoyable and transparent build process tailored to each client.

Standing there last Thursday night was not just about the honor of receiving 2nd place, but rather thinking through all the Structures team members, clients and trades who enabled us to be standing there at the event as well as what has come to define us as a company, just 14 years later. Through the challenging seasons we’ve become more innovative, creative and a tighter knit “family”. . . so receiving this award was just icing on the cake for a team that enjoys the role they bring to the table and the grateful for each project we’re privleged to work on each and everyday.

Here’s to next year!